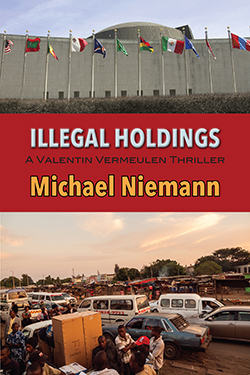 Michael Niemann's third book in the Valentin Vermeulen series has just been released by Coffeetown Press. Just in case you've never experienced the joys of this series, here are all the works featuring Vermeulen:

You can read my review of first two books here.

The list of stories and novels about Vermeulen is getting longer and longer. Can a film or TV series be far behind?

Illegal Holdings, the latest novel, combines Vermeulen's financial sleuthing with the Niemann's now-trademark thriller elements. It's always funny to see the perpetually rumpled-and-jetlagged Vermeulen, usually a bit self-medicated with the best alcohol he can find wherever his duties as fraud investigator for the United Nations Office of Internal Oversight Services take him, disarm bad guys, dive off balconies, or work his way through an abandoned building filled with gagnbangers armed to the teeth.

This time his duties take him to Maputo and elsewhere in Mozambique, a fantastic setting for a thriller, a place mysterious and unknown to most armchair adventurers. The evocative descriptions start on the first page:

It was just another Tuesday morning in late January, the warmest and rainiest month in Maputo. Acacia pods littered the streets of Mozambique’s capital, and its million-and-a-half residents were looking forward to winter. The email, which arrived at the Nossa Terra office at eight thirty, hit Aisa Simango like a fist in the stomach. She was looking out the window. That much she remembered afterwards. Looking at the Avenida Vladimir Lenine, thinking that the street seemed forlorn in the watery morning light.

UN fraud investigator Valentin Vermeulen is on assignment in Maputo, Mozambique. His ho-hum task is to see if Global Alternatives is spending UN money the way they promised. The nonprofit was set up by hedge fund mogul Vincent Portallis to revolutionize development aid. The only upside for Vermeulen is the prospect of seeing his lover Tessa Bishonga, who is reporting on foreign land acquisitions in Africa.

When Vermeulen notices that a five-million-dollar transfer has gone missing, he is given the run-around. First he is told the files have been mislaid, then stolen, then he is assured that the money was never transferred to begin with. But the money was transferred, so where is it now? Vermeulen's dogged pursuit of the missing transfer makes him the target of some ruthless operators. And once he meets up with Tessa, she is inevitably sucked in to the story as well, which turns out to be far more nefarious than either of them imagined.

Another trademark of Niemann's are his stand-out supporting characters. This book has an assortment of them that glitter like the smaller stones around the central jewel in a crown:

I was happy to see that Valentin's love affair with Tessa Bishonga, intrepid reporter, continues. The ending of this books seems to imply that they will start having adventures together. I certainly hope so!

Illegal Holdings: What the Critics Say

Illegal Holdings: Where to Find It 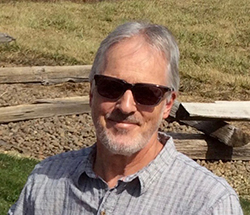 Michael Niemann grew up in a small town in Germany, ten kilometers from the Dutch border. Crossing that border often at a young age sparked in him a curiosity about the larger world. He studied political science at the Rheinische Friedrich-Wilhelms Universität in Bonn and international studies at the University of Denver. During his academic career he focused his work on southern Africa and frequently spent time in the region. After taking a fiction writing course from his friend, the late Fred Pfeil, he switched to mysteries as a different way to write about the world.