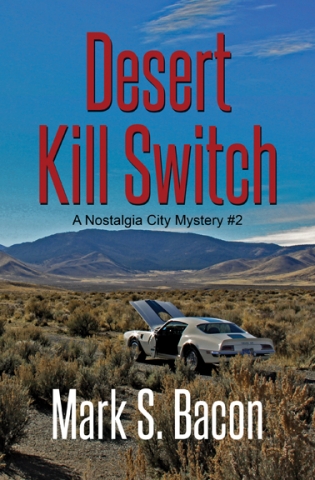 Desert Kill Switch is the second book in the Nostalgia City mystery series that began with Death in Nostalgia City, an award winner at the 2015 San Francisco Book Festival.

Nostalgia City is a theme park I want to go to: it re-creates the 70s, from bell bottoms to psychedelic colors, and sets it in Arizona.

These conflicts do come up in the first book, especially for Kate, the second major character, who handles the public relations for the theme park. She’s a really tall former basket ball player with a studly but long-distance boyfriend and a taste for a challenge. Kate would like to see more of the 70s reality in the theme park, but she is resisted on all sides.

Lyle Deming, the hero of the series, is one of the people who opposes bringing too much reality into the park. He took a job as a taxi driver because he’s burnt out from his job as a cop — by the violence and injustice but also the betrayal. He’s got an anxiety problem and PTSD, not too mention an ill dad who lives with him. He came to Nostalgia City to escape, to have an easy job where he was pretty much guaranteed to make people happy.

But this is a romantic suspense series, so we know Lyle won’t get much time to enjoy his easy job in the theme park.

Instead, Lyle is in a front row seat to witness a series of accidents that happen in the park, accidents that turn out to be sabotage. It’s up to Lyle and Kate to figure out who is trying to destroy their beloved theme park before it even takes off. And if Lyle can get Kate to stop thinking about her muscle-bound boyfriend for just a minute, maybe the spark between them could get a chance to turn into a real flame.

Bacon has followed up this very promising start to the series with Desert Kill Switch, the second book in the Nostalgia City mystery series. Bacon is still exploring the theme of what retro spaces mean for us and do for us. I was a bit disappointed that the second book doesn’t spend more time in the Nostalgia City theme park, as I felt that the first book had only started to explore the issues that would be inherent in such a space, if that space were real.

Instead, the series goes to a real-world event: Hot August Nights, in Reno Nevada, an event that attracts thousands of people who bring in their restored classic vehicles and listen to retro music. In this book one of those people doesn’t make it to the event; instead he ends up dead on the side of a lonely desert road. Lyle is the first one to spot the body, but when he returns to it, it’s gone.

Bacon worked as a publicist for Knott’s Berry Farm, which inspired him to create Nostalgia City. He lives in Reno, Nevada, where the Hot August Nights happen every year. He uses his direct knowledge to continue his philosophical investigation of our relationship to the past, the roles, both positive and negative,  that nostalgia plays in our emotional landscape, All of that is wrapped up in a rollicking murder mystery with two complex and appealing amateur sleuths and a frisson of romance.

Here is the opening to Desert Kill Switch:

Lyle Deming braked his Mustang hard and aimed for the sandy shoulder of the desert road. Luckily, his daughter Sam had been looking down and didn’t see the body.

He passed a thicket of creosote and manzanita and pulled onto the dirt as soon as he could.

“Stay in the car,” he told Sam in a tone that precluded discussion.

He trotted 200 feet back on the road, around the brush, to reach the parked vehicle—and the unmoving, bullet-riddled body he’d seen next to it. The young man, clearly dead, was probably in his late twenties or early thirties. Still-damp blood surrounded the bullet hole in his head and speckled his white shirt where other bullets had slammed into him. Instinctively, Lyle scanned the entire scene. Several sets of footprints in the dust circled the vintage Pontiac. Brass shell casings lay in the dirt. With the car’s door wide open, Lyle saw no one inside. 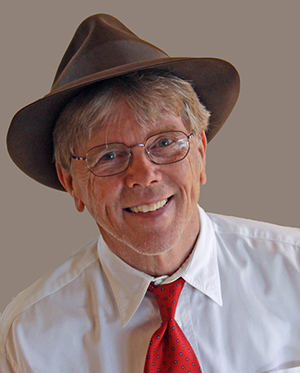 Mark S. Bacon began his career as a southern California newspaper police reporter, one of his crime stories becoming key evidence in a murder case that spanned decades.

After working for two newspapers, he moved to advertising and marketing as a copywriter, later authoring several business books for John Wiley & Sons.   His articles on travel and other subjects have appeared in the Washington Post, Cleveland Plain Dealer, San Antonio Express News, and many other publications.  Most recently he was a correspondent for the San Francisco Chronicle.

Bacon taught journalism as a member of the adjunct faculty at Cal Poly University – Pomona, University of Redlands, and the University of Nevada - Reno.  He earned an MA in mass media from UNLV and a BA in journalism from Fresno State.

Bacon is the author of flash fiction mystery books including, "Cops, Crooks and Other Stories in 100 Words". He taught journalism as a member of the adjunct faculty at Cal Poly University – Pomona, the University of Nevada – Reno and the University of Redlands.

He earned an MA in mass media from UNLV and a BA in journalism from Fresno State. He gets many of his fiction ideas while walking his golden retriever, Willow.

Article in THE BIG THRILL